Azerbaijan: how history textbooks are written

The issue of writing a single history textbook in Russia sparks a lot of arguments – they argue about whether or not they need such a textbook and how to write it, with the society being split over its own past. The new project of the BBC Russian Service focuses on the situation in teaching of history in former Soviet republics, on what the professional community of historians discusses and what the state’s policy is regarding the past.

What new memorable dates have emerged in the post-Soviet republics since they became independent, what today’s schoolchildren know about the Soviet period of their country’s history, how the successfulness of policy of memory is measured and whether a final consensus can be reached regarding the past – these are the issues bbcrussian.com addresses.

Education expert Nabatali Gulamoglu told the BBC in an interview that today’s history textbooks in Azerbaijan are written from nationalistic point of view.

“On the whole, many countries try to write their history with an emphasis on the role of war heroes. That is why there are quite few critical remarks in our textbooks, if there are any at all. To resist this somehow, it is necessary to release learning aids as an alternative to the existing ones so that those reading them can compare different viewpoints and learn what happened really,” he thinks. 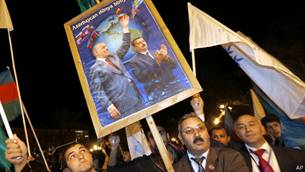 "The Khojaly tragedy"1:“There have been many tragedies and sad events in history, but Khojaly is the biggest and saddest of them. It is not only the most terrible tragedy that happened to Azerbaijan, but the worst thing that has ever happened to the mankind.”

"Black January"2 : "The leaders of Soviet Empire sought to stop the collapse of the USSR and intimidate the people who were demanding freedom. It was decided to organize a massacre in Baku – center of the liberation movement. A lot of troops were redeployed to Baku".

“Those who write our textbooks are subject to populist moods, they present imaginary and illogical things as an indisputable fact. Political position also has a big impact on it. Textbook authors think that they serve people in this way, but they do not understand the real meaning of these words. They are not independent,” says the expert, member of a group on monitoring of textbooks published in Azerbaijan.

According to Gulamoglu, certain authors and publishing houses have a monopoly over writing history textbooks.

Meanwhile, they try to write cautiously about the Soviet period as they think that otherwise it could damage the relations with Russia:

“The way the Soviet period of history is presented in the textbooks has never reflected the real history of that time. It is not necessary to exaggerate or try to describe the past times in a romantic way. It may go on for about 5-10 years, but we will be ashamed when the grownup generation discovers the truth.”

"Soviet Union oppressed us for 70 years" 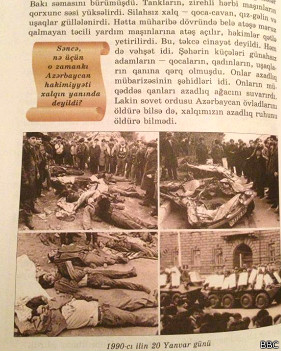 Rauf Aslanov, 9th grader:
“We asked our teachers what they think and whether they loved Azerbaijan in those years. They say that all salaries and standards of living were equal at that time. But the things are better now and everyone lives differently. We learnt from the history textbook “Homeland” that the Red Army seized Azerbaijan. We discussed the good and bad sides of that. The books mostly tell about the Azerbaijani heroes of that time.
Also, we were told that the education system was better in the Soviet period.”

Jamilya Ismailova, 8th grader:
“At the lesson on Khojaly tragedy, in the 5th year, we were told about the Soviet rule, and that the Russians started a war. We did not have separate lessons [on the USSR], but we were told that “the Soviet Union oppressed us for 70 years”.

Aytan Huseynli, 10th grader:
“We have not spoken about the Soviet period. We have not asked and our teachers have told us nothing. I know that Azerbaijan was not independent, it was part of Russia”.

Anar Abdiyev, 10th grader (school with Russian-language teaching)
“I have been told nothing at school about Azerbaijan in the period of the USSR. Our teachers say we will study it in the 11th grade. I have no idea about what there was and was not in those years”. 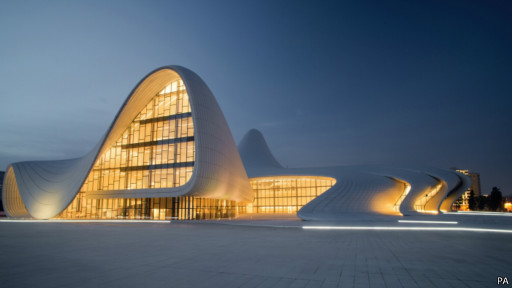 National Salvation Day is celebrated annually on June 15, since 1997, to honor the assumption of office of Heydar Aliyev, the former President of the country and the father of the current President.

Besides, Flower Festival, an official public holiday, is celebrated on May 10 since 2003 in honor of Heydar Aliyev’s birthday, with extravagant flower shows held on the occasion of the event.

Heydar Aliyev Museum opened in Nakhijevan in 1999. It is the largest museum dedicated to President Aliyev. There are several museums in his honor in the country. The museum displays “4,481 pieces … reflecting the life and activities of national leader Heydar Aliyev”.

In addition, Independence Day is celebrated on October 18 and on January 20 Azerbaijan commemorates “Black January”. The day commemorates those who were killed in fierce clashes between the Soviet troops and the activists fighting for Azerbaijan’s independence in 1990.

Independence Museum of Azerbaijan was established in Baku in 1991. With the current exposition featuring more than 20,000 pieces, the main declared aim of the museum is to show that “the Azerbaijani people have fought for independence since ancient times to recent past”.

1 Khojaly – a village in Nagorno-Karabakh whose residents were not evacuated during the war of 1991-1994, as a result of which they died on the approaches to Aghdam, while trying to escape. See the documentary "Khojaly: Between Hunger and Fire. Power at the Expense of Lives"
2To stop the pogroms of the Armenians that took place between 13 and 19 January, Soviet troops were brought into Baku on January 20. The Azerbaijani Popular Front formed a human shield across a tank column; several people were crushed under the tanks