Story of Ilham and Fariza1
By Gulzar Ibrahimova

Once upon a time, there lived a young man named Ilham. Having lost his father early, he learned blacksmith's work and provided for his mother and sisters with sweat and labor.

Ilham was very strong, and therefore blacksmith's work came easily to him. Being used to labor from his childhood, he did not remain idle for even a minute. Foreigners – "uruses"2, Armenians, Jews and Tats, came to him from distant lands to order swords, shields, arrows, bows and other equipment.

Ilham refused no one, did not make distinctions and sent everyone home satisfied. The young blacksmith worked tirelessly and was proud of his fame.

A beautiful girl by the name of Fariza lived in the same “oba”3, in Ilham’s neighborhood. She seemed to say to the sun, “Don’t rise, I will rise instead of you,” and to the moon, “Don’t come out, I will come out instead of you.”

<…> (we are not going to retell every detail of their relationship, we will only say that Ilham fell in love with Fariza, she loved him back and after several romantic dates when they admired the faithfulness and selfless love of the wolf for the she-wolf and saw the she-wolf throw herself down the cliff after the wolf's death, they decided to marry) <…>

Ilham and Fariza lived happily and their love grew stronger day by day. Fariza felt happy and was very afraid of losing her happiness.

The locals did not have time to take up arms while the Armenians and Russians set fire to the Azerbaijanis’ houses, with neither children nor old people spared. They mercilessly killed everyone in their path. The nomads’ camp was destroyed and plundered.

Ilham’s smithy was right beside the road. When the enemies attacked, Ilham was in the smithy and could not hear anything because of the noise of sledge hammer blows. When he looked up, he saw his friends enter the smithy – Stepan, “urus,” and Valod4, Armenian, who used to say to Ilham, “You are my brother.”  They were armed from head to toe. Ilham asked what had happened, but Stepan raised his sword silently, lowered it to Ilham’s side with all his might and chopped his head off. But it was not enough to Valod. He took out the spear made and given to him by Ilham in the old days and thrust it into Ilham’s heart.

Ilham, bleeding and breathing his last, was thinking of nothing, remembering only Fariza.

Meanwhile, blood flowed like water in the nomads’ camp. There were pools of blood everywhere. The yells and moans of people reached the heavens. Those who survived were looking for their relatives. Feeling danger, Fariza ran into the smithy where she saw the bleeding Ilham. Her grief and despair were boundless. She came up and pulled out the enemy dagger5 from her loved one’s heart. Fariza laid the head of her loved Ilham on her knees and started singing a lullaby. For three days and three nights, they could not tear her away from her loved one. On the third day, at last, the aksakals forcibly took Ilham out of Fariza’s arms and laid him to rest.

Summoning her remaining strength, Fariza rose and went to the cliff where they had observed the love of the wolf and the she-wolf. With an effort, she climbed up the cliff and, with the words "I will not forget our oath," threw herself down the cliff.

Fariza was laid to rest next to Ilham and since then, loving couples come to their grave and swear to love each other forever.

Illustration to the tale about Ilham 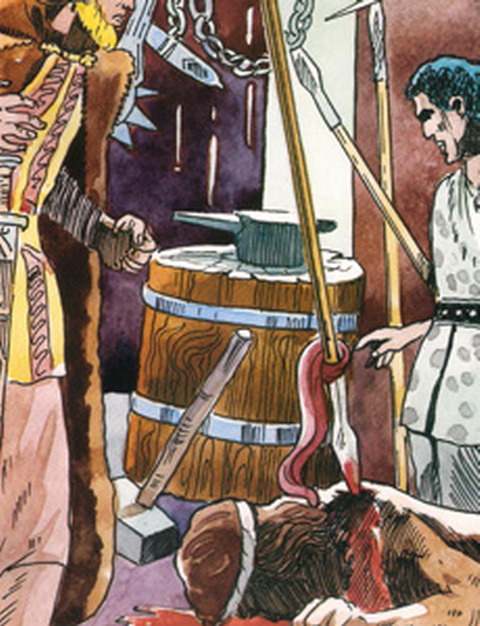 1 This tale is recognized as a "model of modern literary works for children." According to Professor G. Namazov, it is called to cultivate "patriotism, sincerity, honesty and purity of soul" in children. It is included in the learning aids for pedagogical university students, as well as in the school curriculum
2 Russians
3 Here – nomads' camp
4 Distorted form of Russian name Volodya (short form of Vladimir)
5 The author apparently lost the narrative thread – Valod thrust a spear into Ilham's heart, but Fariza pulled out a dagger